What is the Stock Market? 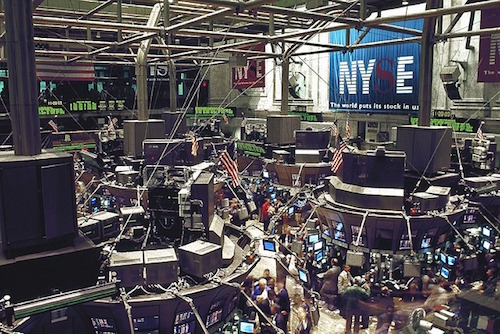 The stock market is confusing. When you talk about it, people tend to nod their heads sagely and make bland comments, like they do with most things relating to the economy.

We know it’s important, and most of us hope it will provide us the retirement we want – but we don’t actually understand it, and it seems like everyone else does. So we don’t ask questions and just hope for the best.

But when you use something you don’t understand, you’re more likely to make pretty fundamental mistakes. For most people, that means putting your retirement at risk. So let’s clear up a few of the questions most people are too embarrassed to ask.

Where is the Stock Market?

When most people think of the “stock market” they think of the building with all of the columns on Wall Street with the bull (and now girl) outside. That’s the New York Stock Exchange, and it’s not a horrible visual for the stock market.

But it’s only one of a massive number of stock exchanges currently operating around the world. Yes, the NYSE is one of the most important exchanges out there, but it’s not alone. As of the end of January, there were sixteen exchanges with a market capitalization greater than $1 trillion (the combined value of all companies traded on the exchange). In 2015, these sixteen exchanges represented 87% of the global market value.

While the NYSE is the largest exchange (it’s bigger than the next three exchanges combined), the stock market isn’t limited by geography. Not only are there exchanges all over the world, but the exchanges are pretty much entirely digital now.

In fact, the NASDAQ (the second largest exchange in the world) has no physical trading floor. Back in 2014, Marketwatch decided that trading floors were so irrelevant that they wouldn’t illustrate stories with pictures of them anymore.

What are People Buying and Selling?

This is pretty easy – they’re buying and selling stocks. But what are stocks? That’s a little more complicated.

Companies sell these shares to the public not (just) because they want to seem important. The stock market is actually, at it’s very root, a tool companies use to raise money. Conceptually, it’s basically “Shark Tank” without the awkward pitches and nicer suits. A company asks the market for money and offers ownership in their company in exchange. They’re negotiating with more people than on the show, but the basic idea is the same.

Once these shares hit the market (called an Initial Public Offering, or IPO), they can be traded endlessly. Regardless of how many times these shares are traded, the markets never really stop being about companies raising money. Individual traders are focused on making money for themselves, and companies watching their stocks being traded can get a pretty good sense of what would happen if they tried to raise more money from the markets (which is called a “secondary stock offering”).

So How Are Stock Prices Set?

The value of a stock is made up of today’s value of all of the future cash flows of the company. So, to a large degree, it’s a guess. It’s not a random guess by any means, but there’s no Correct with a capital C price for Ford. There are simply too many unknowns.

But it’s not hopeless. Millions of people are in the market every day, constantly evaluating and buying, creating a fairly accurate consensus answer (in other words, the stock price), which becomes a good estimate of a company’s value based on currently available data.

This is all happening incredibly quickly. In 2016, on average, there were almost 83 million trades completed every day at an average value of $346 billion. For comparison, the US government spent $3.6 trillion in all of 2015. So every ten days, the markets traded roughly the equivalent of the federal budget.

And everyone is always looking for an edge. If someone thinks Ford’s stock is undervalued (worth more than it’s currently trading for), they’ll buy up as much as they can. In turn, the price is driven up to a more “appropriate” level.

That’s what people are talking about when they refer to the market as “self-correcting.” It incorporates new information – based purely on people’s trades – astonishingly quickly.

But the whole system is based on disagreements. The vast majority of trades happen because two people fundamentally disagree on the price of a security. I’ll only agree to sell you my share of Ford if I think it’s worth less than you’ll pay for it. And you’ll only buy it because you think it’s worth more than what I’m asking.

No one ever accused the markets of being neat and orderly. Only when you step back can you see the beauty of how they operate. By combining all of these disparate signals and pieces of information (and a whole bunch of yelling), the markets arrive at a reasonable estimate of every company’s current value.

But it’ll change in a second.

So Why Should You Invest in the Stock Market?

We all kind of accept that we’re supposed to invest in the stock market for retirement. Most people won’t be able to reach their retirement goals without doing so.

But investing in the stock market is all about risk, and before you take any risks – especially with your retirement – you want to think carefully about what is going on. Don’t just accept the conventional wisdom and plunk a chunk (or all) of your 401(k) in the markets and be done with it. You need to understand what you’re doing and why. Otherwise, you won’t know if you’re on track for your retirement goals or not.

One of the fundamental truths of investing is that risk and return are related. You can’t get higher returns without taking on more risk. If you need the higher returns associated with investing in the stock market, you need to be willing to accept the higher level of risk and not be scared away every time the markets hit a bump.

But the risk goes beyond just a bump. Investing carries the risk that everything falls apart. Imagine if you were planning on retiring in 2000 (during the dot-com burst) or 2009 (during the Great Recession). Those are risks you have to keep in mind.

But the rewards can be very nice. Investing (intelligently) in the stock market means you could (hopefully)spend more in retirement.

Whether or not spending more in retirement sounds important to you should tell you a lot about how much (or even if) you should invest in the stock market. This is not a binary decision – you don’t have to go all-in or not invest anything. In fact, the ratio between stocks and bonds in your portfolio is the most important investment decision you’ll make.

Getting what you want out the stock market doesn’t just happen. Don’t just throw money in a portfolio because people say you’re supposed to do it to get ready for retirement. Before you step into the market, sit down and create a plan so you can tell if you’re doing it right.

For more on understanding the financial markets, read our ebook