Remember when the financial media was positively giddy over the fact that the Dow Jones hit 20,000 points earlier this year (and we weren’t so impressed)?

In part one of this series, we looked at what exactly the “points” measure in market indexes (not always what you might expect, as it turns out). Today, I want us to get a better feel for the mechanics of indexing and an overall better idea of what they do and why. 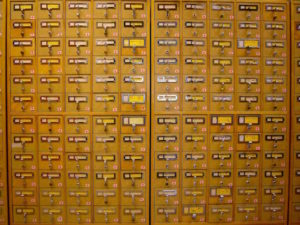 If, when you hear the term “stock index,” the first thing that springs to mind is the S&P 500, then you’re in pretty good company. That’s the one that everyone talks about, and some of the world’s biggest index funds happen to be named after it.

We’ll talk about index investing next time, but for now just keep in mind that in spite of being the index everybody knows, the S&P 500 isn’t the oldest one out there. The very first index was the Dow.

“The first Dow Jones Average appeared in the Afternoon News Letter on July 3, 1884. It consisted of the closing prices of eleven companies: nine railroads and two industrials. [Charles] Dow’s idea was to provide an overall measure of the performance of active companies, at a time when an average day’s activity on the New York Stock Exchange was about 250,000 shares.”

If you’re thinking that eleven companies doesn’t sound like much of a market proxy, you’re absolutely right. The Dow must track so much more than that today, right? Actually, no. Since 1928, the Dow has only tracked thirty stocks. Not only that, it’s still using mostly the same tracking methods it did almost ninety years ago.

Seems kind of outdated, right? Yeah. We agree. So do a lot of people.

James Mackintosh, senior market columnist for The Wall Street Journal (more or less the birthplace of the Dow), had this to say: “It’s time to ditch the Dow. After 120 years, the venerable Dow Jones Industrial Average is an embarrassing anachronism, abandoned by professionals and beloved only by a media that mostly knows no better. It needs to be updated or, better, replaced.”

Despite all of these glaring faults, the Dow keeps chugging along. The markets are comprised of people, and we humans can be sentimental fools, even about our market indexes.

On a practical level, the Dow functions as a kind of time capsule, preserving a historical point of view you won’t find anywhere else. Add to this the comforting glow of “familiarity,” and you can see why its parent company chalks its continued existence up to it being “understandable to most people.”

How Does an Index Get Built?

A new index is born whenever an indexer invents a new and (in their mind) “better” way to track market performance. If enough participants get on board with the new method, you’ve got a new index on your hands.

That’s just free markets doing what they do, and at face value there isn’t much to it. The moment we decide to get a better look at how indexers track their particular slice of the market, though, suddenly what seemed pretty straightforward is more complicated than we realized. Let’s take a look at just a few of the ways indexes get divvied up.

One important consideration is how much weight an index should give each of its holdings. In the S&P 500 for example, should returns from the Emerson Electric Company carry the same weight as returns from Apple? For this reason, weighting approaches vary between indexes.

While there are plenty of variations on the themes we’re discussing, the main takeaway here is that indexes with different weightings can arrive at some very different conclusions about how a particular slice of the market performs.

Just how many securities does an index have to track in order to reflect its target market correctly?

Like I said before, the Dow uses thirty securities to represent thousands of publicly traded U.S. stocks. This hearkens back to the olden days – you just don’t see other popular indexes supported by such meager samples. In the Dow’s defense, it tends to favor heavily and frequently traded stocks. So its prices are timely and real (but only for thirty stocks).

On the opposite end of the spectrum, you have the Wilshire 5000 Total Market Index, which “contains all U.S.-headquartered equity securities with readily available price data.”

Somewhere in between these two, the S&P 500 sits tracking about (though not exactly) 500 publicly traded U.S. securities.

So, what exactly makes up a “market”? That depends. Consider the following:

Proper Use and Abuse in Indexing

Can we really know what an index is up to? In the first part of this series I showed how every index is a model, meaning it’s a representation of reality, but it’s never perfect. Every model has its own little quirks that can influence the accuracy of its outcomes.

These are just a few of the important concerns an indexer has to take into account. It’s not an exaggeration to say that, just like a Magic Eye poster, the longer you look at an index, the more nuance you will notice.

One helpful takeaway here is that some indexes really are easier to turn into useful and investable index funds than others. Not only that, but some indexes lend themselves more easily to smart, factor-based investment strategies than others. Frankly, it’s often true that indexes aren’t the best solution for that intended purpose in the first place.

Next time, we’ll finish this series on indexes by looking into the specific merits and weaknesses that are specific to index investing.

In the meantime, learn more about how a financial professional can help you navigate the world of investing by downloading our ebook,