Last time, we compared retirement spending rules using historical data, but I believe we can arrive at a much more realistic picture for today’s retirees using Monte Carlo simulations. To that end, today I want to simulate these strategies with Monte Carlo simulations for stock and bond returns using current market environment as a starting point.

The XYZ rule used to create Exhibit 1 is the same as I used in my previous post’s exhibit: The retiree accepts a 10% chance that real wealth falls below $15,000 (based on an initial $100,000) by year thirty of retirement.

Spending levels in Exhibit 1 are generally lower than historical data, even though its patterns are largely similar. Due to the similarities, I will not go into great detail in describing the numbers.

That being said, the starting points merit some discussion.

For instance, Bengen’s baseline constant inflation-adjusted spending rule supports an initial spending rate of 2.62% as a starting point—noticeably lower than the 4.18% found with historical data, but it is the implication of retiring in a low interest rate world. For the $100,000 initial portfolio, this supports $2,620 in real spending across the entire distribution of Monte Carlo simulations for as long as wealth remains.

Bengen’s floor-and-ceiling rule allows the initial withdrawal rate to increase to 3.01% and helps keep downside spending at a level close to the baseline amount. Vanguard’s floor-and-ceiling rule again behaves closer to a fixed percentage strategy, though it preserves wealth at a stronger pace. Next, the Kitces ratcheting rule has the lowest initial spending rate of 2.54%, but allows for significant upside spending potential while keep the downside risk very similar to the baseline.

Both the Guyton and Klinger decision rules and the Zolt rule allow initial spending to rise about 4% to 4.33% and 4.29%, respectively, though their subsequent evolution varies as before. Finally, the modified RMD rule is calibrated to the XYZ rule by using a 1.08 multiplication factor for the RMD rates, and it again leads to large upside spending potential and the most downside spending volatility.

Sustainable Spending Rates from an Investment Portfolio over 30 years

Using a 50/50 Portfolio of Stocks and Bonds

Simulations Based on Current Market Conditions 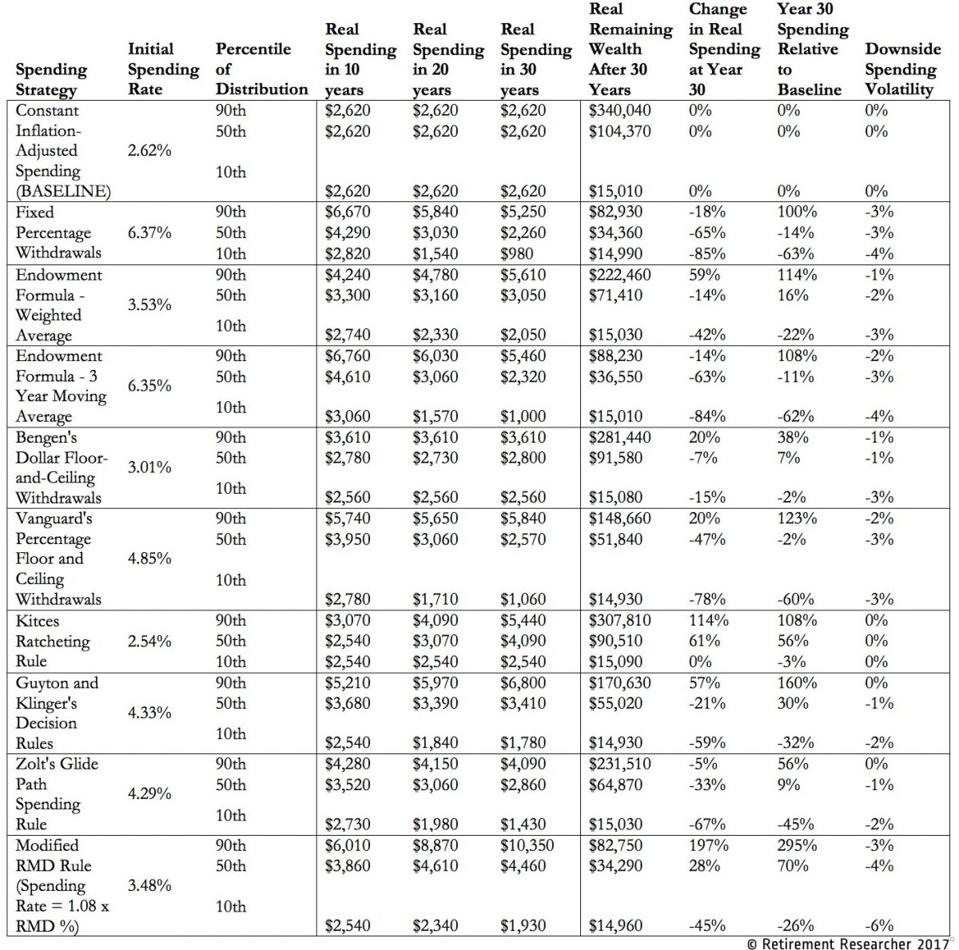